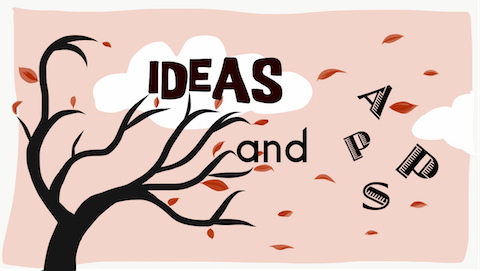 This App uses the iPhone camera to capture images automatically when it detects motion.

It analyzes the image being captured by the camera and, if it detects any movement (it may be set to detect faces), takes a serie of shoots dated and timed. The pictures are temporally saved and may be saved in the iPhone camera roll. When the session ends or when the App is closed, the pictures that have not been saved are automatically eliminated.

This App requires IOS 7.0 and it has been designed for iPhone.

When the images capture is activated there is a high battery consumption, thus it is convenient to keep the iPhone connected to the charger if a long use is to be done.

At the bottom there is a navigation bar that takes you to different options:

The capture of images is controlled here. When the session is initiated images will be capture whenever a movement is detected. These images are stored in a temporal roll, and they will be erased when stopping the session or when closing the application. 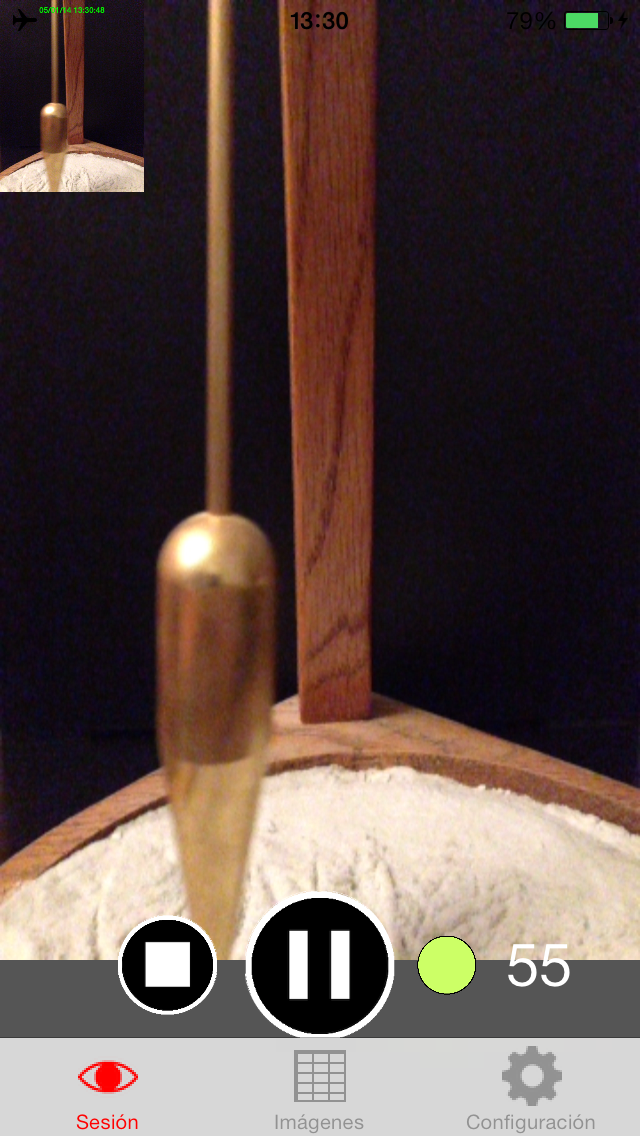 Play/Pause – starts/pauses the capture. The status is display with a yellow mark when session is inactive, green when is active.

Stop – Stops the capture and erases the images stored in the temporal roll.

The images being captured by the camera are analyzed in real time (live) and if any movement is detected (or a face, depending on the settings) the red light will blink, a beep will sound (if sound is activated) and the image will be saved in the temporal roll.

By the light indicator a number is displayed, it refers to the number of images captured in the temporal roll. And in the left up corner a miniature with the last shoot is shown.

In this option you can see a list of miniatures of the images captured that are saved in the temporal roll. When touching one of them it enlarges and two bottoms are displayed, one to go back to the list of miniatures and another to save the image in the iPhone roll.

The images that have not been saved are erased when stopping the session. 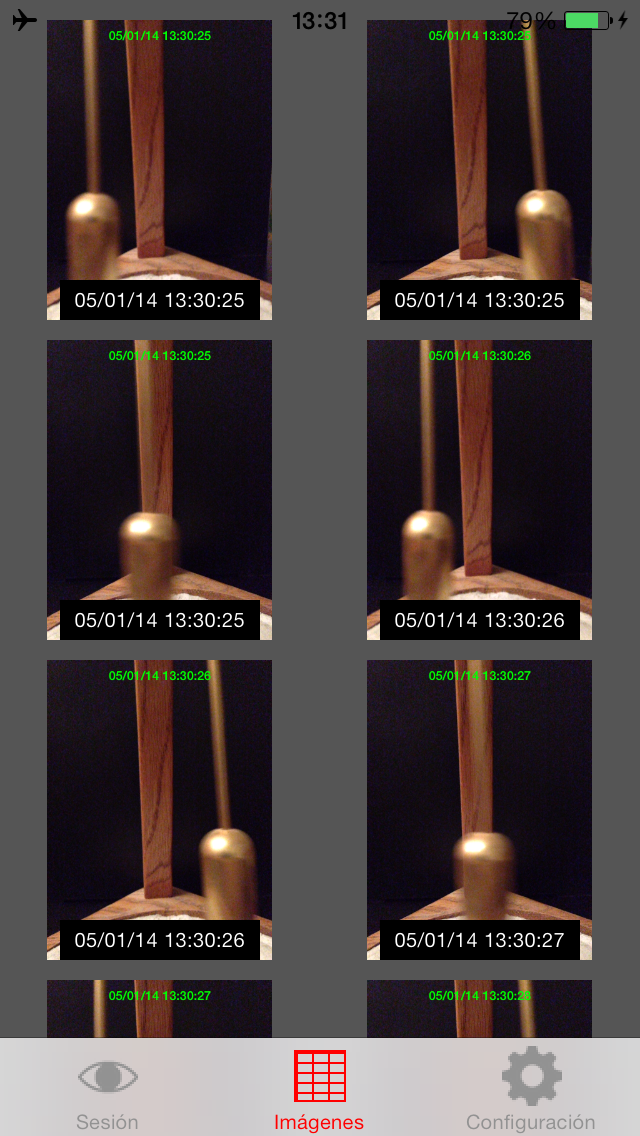 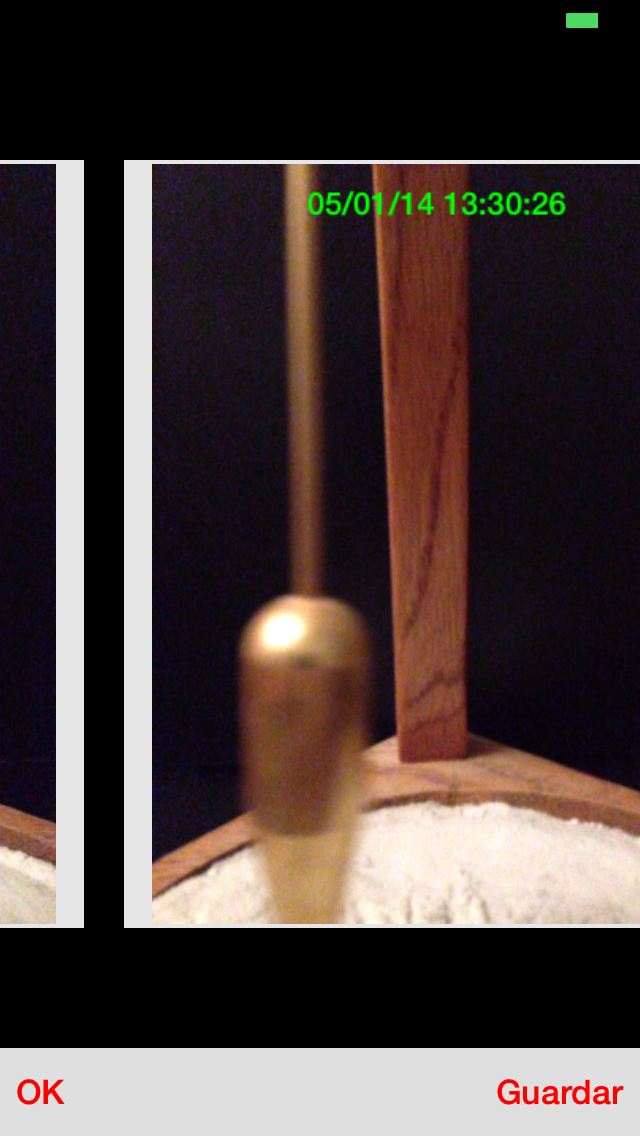 In these options various parameters can be set. 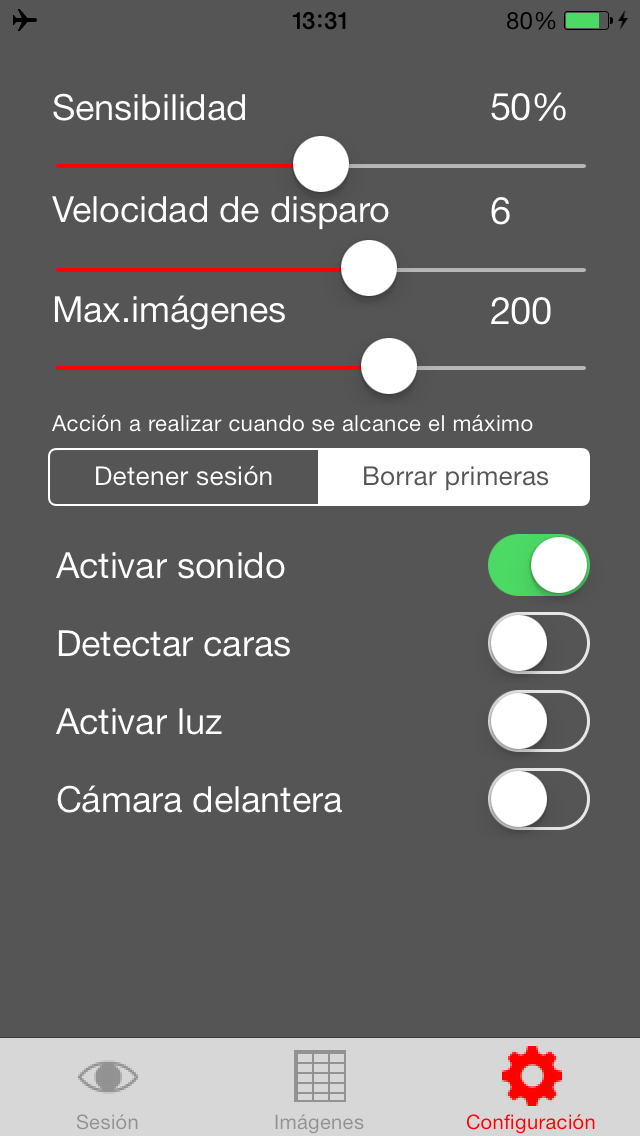 Sensibility: It can be adjusted by a sliding control from 0 to 100. It indicates the degree of tolerance to slight changes in the image.

Shot limit: Wit this sliding control the maximun number of images that fit in the temporal roll can be set. The range runs from 20 to 300.

Action to take when the shot limit is reached: It can be selected what to do when reaching the maximum number of pictures in the temporal roll.

Sound: If this option is activated, whenever a movement is detected a beep will sound.

Detect faces: If this option is activated it changes to the mode face detecting and the capture will be done when the iPhone detects a face.

Torch: Activate light: When this option is activated, the camera light turns on (this is only valid when using the back camera in the iPhone)

Front camera: If this option is activated the front camera is being used. In other option will be used the back cámara.

NOTE: The face detection depends on the illumination, the angle and the type of face.

Webnode, an innovative sitebuilder
Have a captivating website for free!
Get started